XM continues to collaborate with the UNHCR to help the National Emergency Response Mechanism (NERM) in Greece, which protects unaccompanied refugee children.

Due to the Ukrainian conflict, more than 6,000 children entered Greece in March 2022, making NERM's actions even more crucial.

NERM has a hotline that is operated 24 hours a day, seven days a week and accepts recommendations regarding unaccompanied children living in perilous situations.

It is accessible in other languages, including Russian and Ukrainian.

After locating a youngster, the team approaches them to provide food, medical attention, and any other assistance they may require.

A kid is placed in a shelter for up to three weeks, during which time social workers construct a plan suited to their best interests.

After that, they are relocated to long-term housing where the plan is implemented.

As part of their broader efforts to make the world a better place for people who have been forced to escape their homes, XM continues to donate to this vital service.

XM which is specifically known for being a parent company of Trading Point Holding was fabricated back in 2009 and since then it's been operating globally as a Forex and CFD brokerage company.

And as for XM global, it was founded later than expected making its way in between late 2017 which is regulated by IFSC (International Financial Services Commission) under the license number of (000261/106).

Later on, the brokerage also got regulated with 3 other regulatory bodies (ASIC and CySEC) making it one of the most secure brokerages operating at the current time.

Moving on, XM global contains more than 1.5 million traders across 196 countries. Besides being fair is the main ethic of XM and that's the primary reason, the broker gets praised by numerous retail market traders.

XM offers 5 types of trading accounts to the retail market traders which go as follows: Micro, Standard, XM zero, XM ultra-low finally it's the XM share accounts. Let's get a brief overview of this:

First of all, the Micro accounts are more of a GO-TO platform for the new traders as it requires a deposit amount of only $5.

Don't let that amount distract you from anything because you'll be able to trade on all the base currencies including AUD, USD, GBP, CHF, JPY, EUR, PLN, and HUF.

In the same way, Standard accounts also offer all the base currencies similar to micro accounts and the deposit amount is also $5.

The only difference is in the standard accounts, 1 standard lot = 100,000 units of the base currency.

Moving on, the Zero accounts require a minimum deposit amount of $10 and the base currencies are USD, EUR, and JPY.

The standard lot of zero accounts are also similar to standard accounts.

And in the Ultra-low accounts, the minimum required amount is $50 where USD, EUR, AUD, GBP, SGD, ZAR are the base currencies. The standard lot is also similar to standard accounts.

That's not even all!

But the share accounts only allow you to trade on USD as a base currency. As per the trading leverage, well it can vary from 2:1 to 30:1 pretty quickly which obviously depends on the trading instrument and the average spread is 0.1 pips on EUR/USD.

Apart from this, XM offers a market execution process rather than instant execution

XM renders an ultra-wide range of trading instruments to its users as they are committed that way to providing all the possible trading assets to the retail market traders.

And in order to execute that initiative properly, they are giving access to:

Forex: More than 57 currency pairs including the exotic ones.

Metals: Availability of precious metals including gold and silver.

Commodities: You'll be eligible to trade on 15 commodity stocks.

Stocks: You'll be able to experience up to 28 major company shares along with 1240 stock CFDs.

Indices: You'll be able to trade on a wide range of indexes including the HUGELY popular ones. 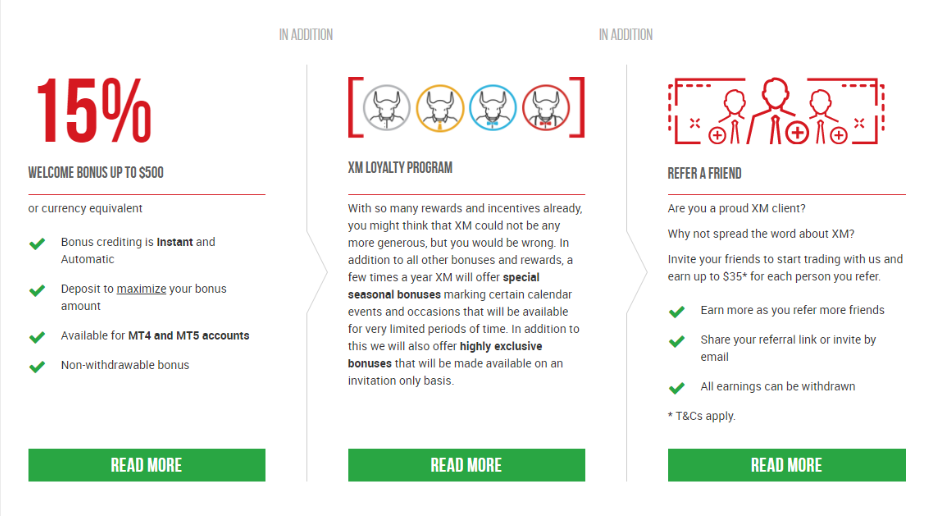 As for XM, they proffer a welcome bonus of $30 if you open an account with them.

Along with that, XM also offers a loyalty bonus along with a referral trading bonus which is also applicable to all retail market traders.

But keep in mind that standard conditions may involve while applying for the trading bonuses.

I have to stop here, but there is still much to discuss. Look at XM Review 2022 to learn more about this broker.

I hope you all have a good time in trading.